Oh, how the meta has changed. Exactly two years ago, Fortnite: Save the World was still growing and Love Ranger Jonesy was available through a questline, back when skins were still a new thing in Fortnite Battle Royale. The hero rework still hadn’t happened, and the Happy Holidays perk wasn’t in the game yet.

Love Ranger was the poster-boy for griefers and leechers in Fortnite back then. You would find hundreds of these players standing still or begging for weapons in missions, and it had become a norm to simply exit the mission if this guy was a teammate.

Two years have passed and we’re now at a stage where this dude is no longer a Survivalist reskin. He is instead the king of Shockwave and is 100% Twine-viable.

Valentine’s Day is nearing, and our beloved Cupid wannabes have descended into Fortnite, stronger than ever.

Distance means nothing if your feelings are strong enough

Life won’t always be fair. Your undead AI-zombies might not always be in your proximity. Love Ranger Jonesy is here to teach you that if you try hard enough, you can always make an Impact.

Love Ranger’s Standard Perk, “Power Impact”, increases your Shockwave radius by 37.5%. However, I’d avoid using him as a Support hero for that 6ish second Shockwave build you might be tempted by.

I find it way better to have higher radius on your Shockwave rather than a lower cooldown, which is where Love Ranger’s Commander Perk comes into the picture.

Here’s my build for Love Ranger. It focuses on Shockwave damage, cooldown, movement speed, and energy and health regeneration. If you really want to have fun spamming Shockwave  – but with a smaller radius – swap Love Ranger Jonesy and Shock Trooper Renegade’s places. 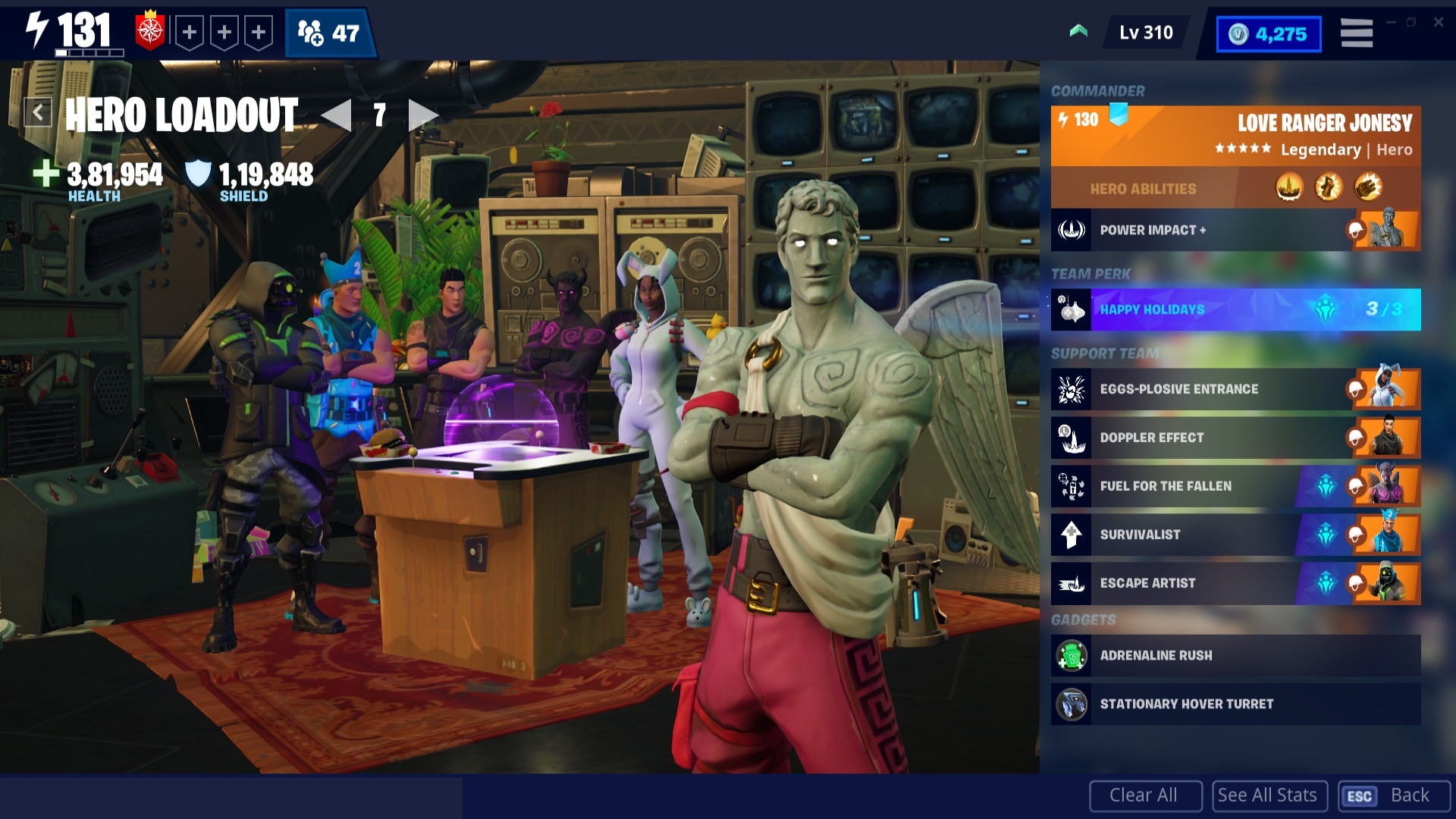 All of the above Support heroes are Soldiers as well. Egg-splosive Entrance and Doppler effect make your Shockwave look something like this:

How cool would it be if the eggs were grey rocks instead, to match with Love Ranger’s cosmetics?

Fuel for the Fallen gives you the energy that you need to spam your abilities, all of which are going to have a lower cooldown because of Happy Holidays. Survivalist and Escape Artist are for survivability and utility, respectively. Regenerating health and having a good movement speed matters a lot when the core ability is for close-range combat only.

The movement speed may not sound like an essential thing on paper, but it helps so much considering how slow and sloppy Fortnite Soldiers are. Tip: try crafting 1-star Hammers that have leap-attacks as their secondaries. It allows you to jump around the objective using the Hammer, without really wasting valuable resources. Take that, Chris Hemsworth.

Don’t let the darkness in your heart take control

Conspiracy theory: since this is a cash-only skin in Fortnite Battle Royale, Epic Games gave him an underwhelming Commander Perk in Save the World. Makes sense, doesn’t it? Less people will use him, he won’t be seen as often in missions, and more people would buy him as a cosmetic in Battle Royale.

Fallen Love Ranger Jonesy, although incredibly cool to look at, is underwhelming as a Commander and is best spared for your Support slots.

Buuuuut, you can always be a rebel and just use any build you want on him. Discussing fashion is like asking your boss for a leave; nobody cares until you look sick. They’re laughing at you now but they’ll be admiring your charcoal pecs later. 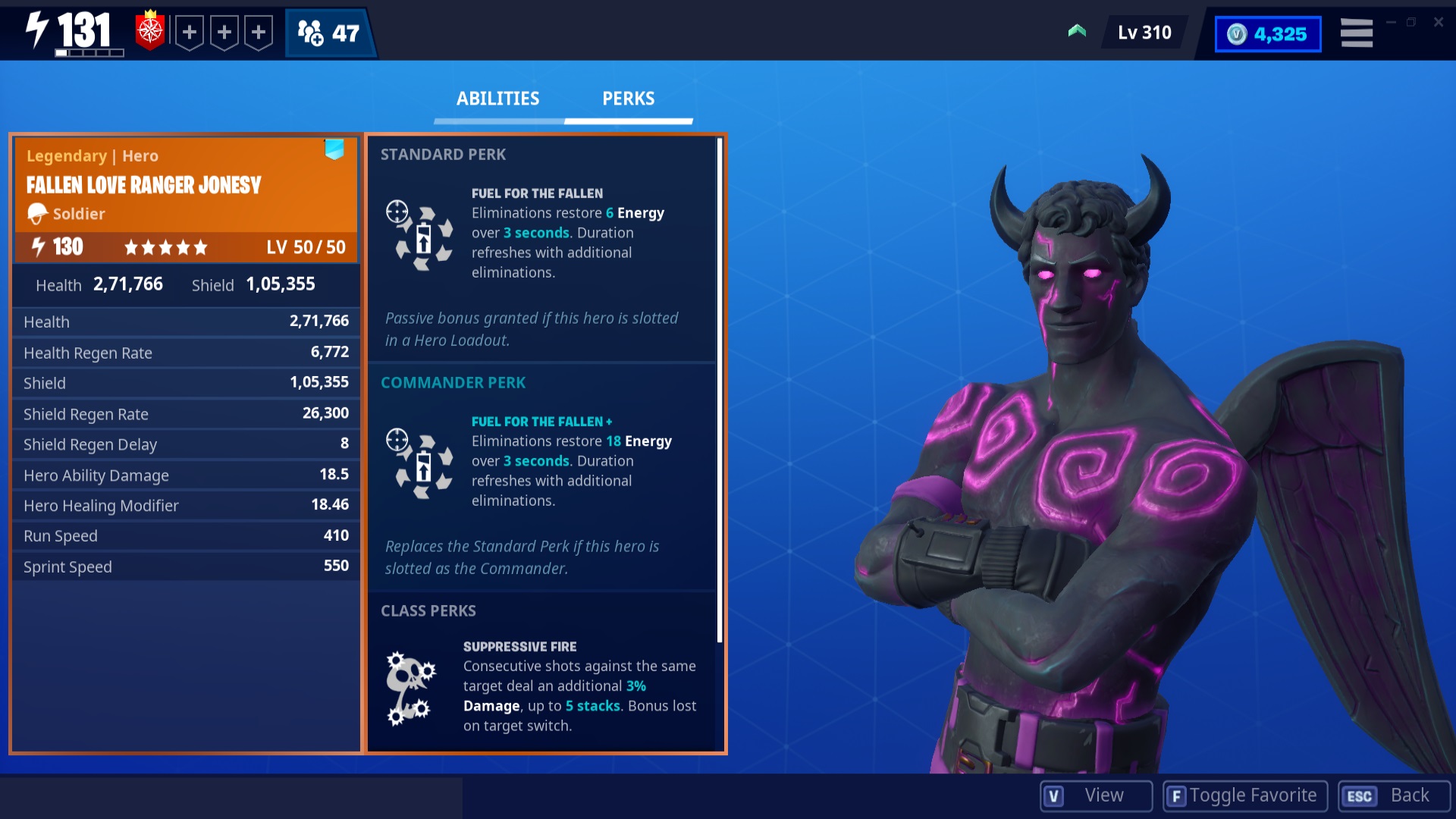 Fallen Love Ranger is based on replenishing Energy via eliminations. The Commander Perk’s added utility is unnecessary, which limits him to Support slots if you’re looking to min-max. He is certainly a great addition to many Support roles with the new Happy Holidays perk making quite a bunch of abilities spammable. A great example would be an Overtaker Hiro build, where you’re trying to spam Kunai Storm.

Shockwave is easily in the top 3 contenders for best AOE damage in Fortnite: Save the World. Using Love Ranger Jonesy’s massive range honestly spoiled me for a while. When I was using my Master Grenadier Ramirez build later, I kept misjudging when to use Shockwave because Love Ranger’s covered such a large area and hers was so lackluster.

It is important to understand that people are unique and they will keep switching roles in your life. What helped me find peace of mind was focusing on Master Grenadier’s grenade range and man, she’s an awesome character.

To conclude, I’d definitely like to recommend picking up every available Valentine’s Day hero from the Event Store. The weapons may have their issues (pleasebuffcrossbows.jpg), but the Valentine’s Soldiers and Ninjas are all pretty unique and worth the gold.