Doing this is optional, but before I levelled Jilly Teacup, Fortnite‘s new Outlander, to Level 130, I wrote this on the wall next to my PC:

She stares into your soul,

Fetches your fears from the deep.

Don’t judge me but I

now check under my bed before I sleep.

Fortnite‘s newest toy-themed Outlander was released with this week’s patch, and is available through a quick 2-page Quest called “Misfit Toys”.

The quest is pretty easy overall, and if you’re wondering what you’re supposed to do in its first mission, just join a random mission and look for a survivor marked on the map.

Jilly Teacup is a combat-focused Outlander built around buffing your Teddy’s Crit Chance. Her quest also rewards you the new “Happy Holidays” perk, which significantly lowers your Ability cooldowns. The perk is excellent, in general and makes for a lot of fun builds that we’ll cover in another post.

You can go whatever way you want with the build. You can go for damage or range, or go the +Energy damage route with Cyberclops. I went for a well-rounded build instead, and it has worked pretty well for me in PL 140 missions. 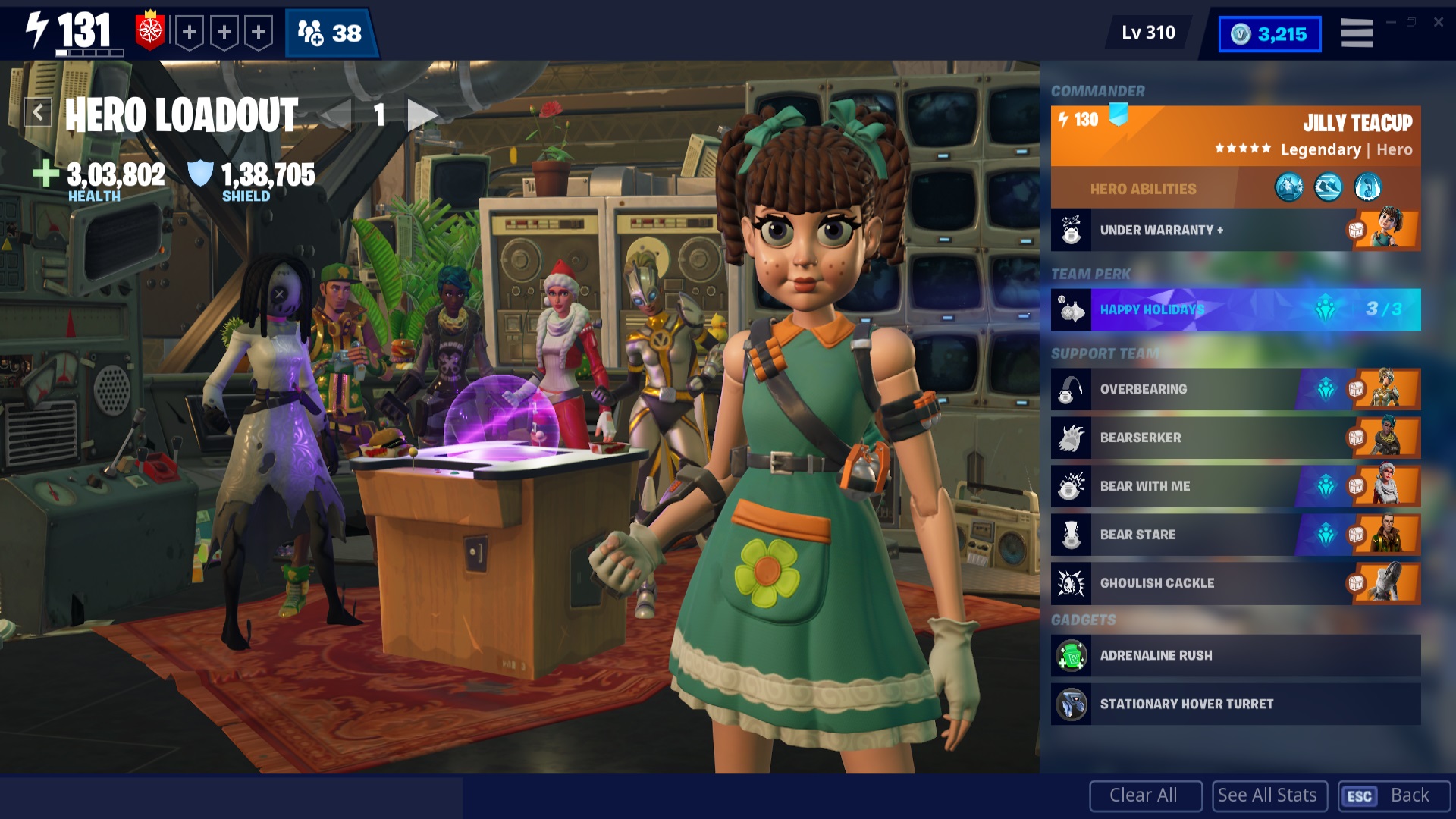 The Teddy has been pretty efficient at taking on PL 140 Smashers down! This amount of DPS makes Storm Chests even easier, and having one of these in your squad is definitely going to make Smasher waves easier too. I wonder if this is Epic’s answer to the Smasher nerf requests…

Jilly’s Commander Perk is Under Warrant:

On its own, the perk is excellent. Guaranteed Crit Chance against new targets is huge, and to add to it, there’s an extra chance for energy damage.

However, the best part about using Jilly is the cosmetic modifications on her Teddy. Not only is Teddy dressed like a little kid, but he also says lines like “I’ll always be your bear” and “Cuddly Bear attack“. This is all pretty cute and doesn’t seem like it should inspire you to write creepy poems on your wall, right? Just don’t look at Jilly’s eyes…

Jilly as a Support hero

Using Jilly Teacup in Support slot is honestly the better way to go if you have Jingle Jess. Jilly’s Standard Perk is almost the same, minus the zapping: “T.E.D.D.Y has 100% Crit Chance against new targets and has a 5% chance to Malfunction. During Malfunction T.E.D.D.Y finds a new target after every shot.”

It’s pretty surprising that they didn’t lower the Crit Chance if you use her as Support, making Jingle Jess’s 12-second uptime boost a slightly better pick for your Commander slot. Note that if you use Jilly in the Support Slot, you will lose on the cosmetic upgrade on your Teddy. 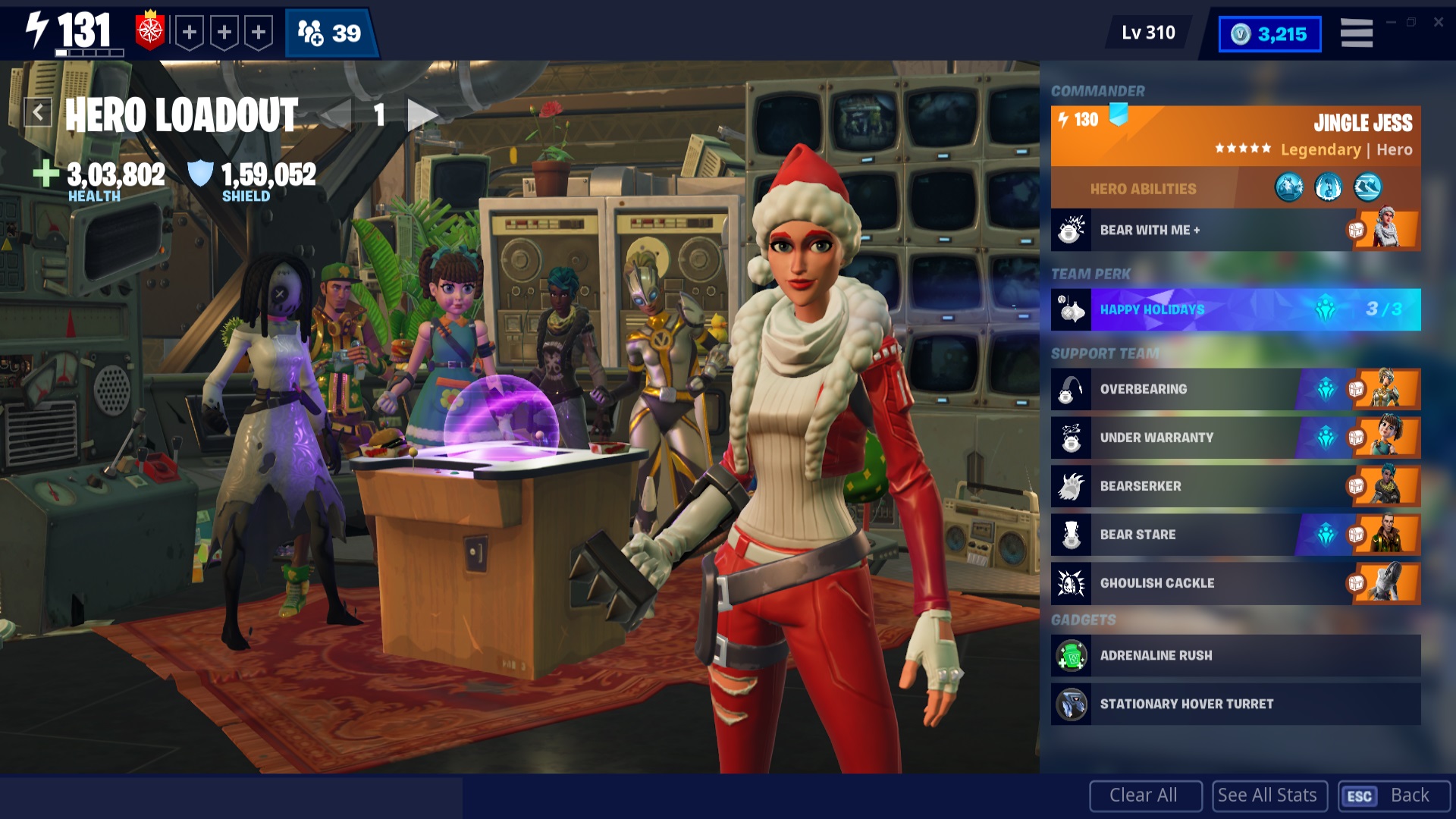 In this loadout, I’ve only swapped the positions of Jess and Jilly from the previous build.

Jilly Teacup and Happy Holidays are fantastic additions to the game. It was pretty hard to Crit on your Teddy at all, and even harder to really make worthwhile cooldown reductions on your abilities.

We’re looking at a definite return of the Teddy meta, and it seems like Epic Games has taken a moment to paws and reflect on the recent meta-shift they were attempting. With the right build, you’re basically looking at bearly any downtime on your Teddys. This takes me back to memories of Fortnite in 2018, before Outlander mechanics were revamped furever.