Fortnite: Save the World now has a hero loadout based on Swamp Knight that lets you turn missions into passive, roaming activities.

Power-creep is normal in PvE games. Developers release weapons or characters that are stronger than what the game already has, one-upping themselves in a way, and in turn, keeping the content fresh. But it’s always hilarious to watch them cross that line between stronger-than-what-the-game-already-has and downright-broken, and Swamp Knight is the perfect example of that.

The hero, when used with the new Trick or Treat perk, allows you to stay invincible while dealing an average of over 100k DPS without using any resources. In simpler terms, you can stand in the middle of a group of enemies and dance, but they will die and you will not. All of this will happen without any resource cost, ability usage, or cooldown. Or a ban, as this is in fact not an exploit: Epic actually made this a thing. The only little limitation is that this build won’t be strong enough when the mission level exceeds your Power Level.

When Swamp Knight was initially released, its Commander Perk looked pretty average on its own. It dealt damage to Mist Monsters based on your missing health, and spawned damage-dealing “Phantasms” if you took damage. It felt pretty underwhelming since the Phantasms were pretty weak, and Mist Monsters are in the minority of enemies you encounter. Epic then released the missing piece of the puzzle in Patch 11.30 – the “Trick or Treat” Team Perk, that allowed you to conjure extra Phantasms and gain a crazy amount of health alongside.

Other PvE games have had unkillable characters as well, and the core of these characters is always an infinite loop of 1) lose health 2) X happens 3) X triggers health gain. When you pair Swamp Knight with Trick or Treat, you essentially spawn healing and damage-dealing Phantasms whenever an enemy damages you. This creates the foundation of a cycle where every time an enemy damages you, they get damaged and you gain health. 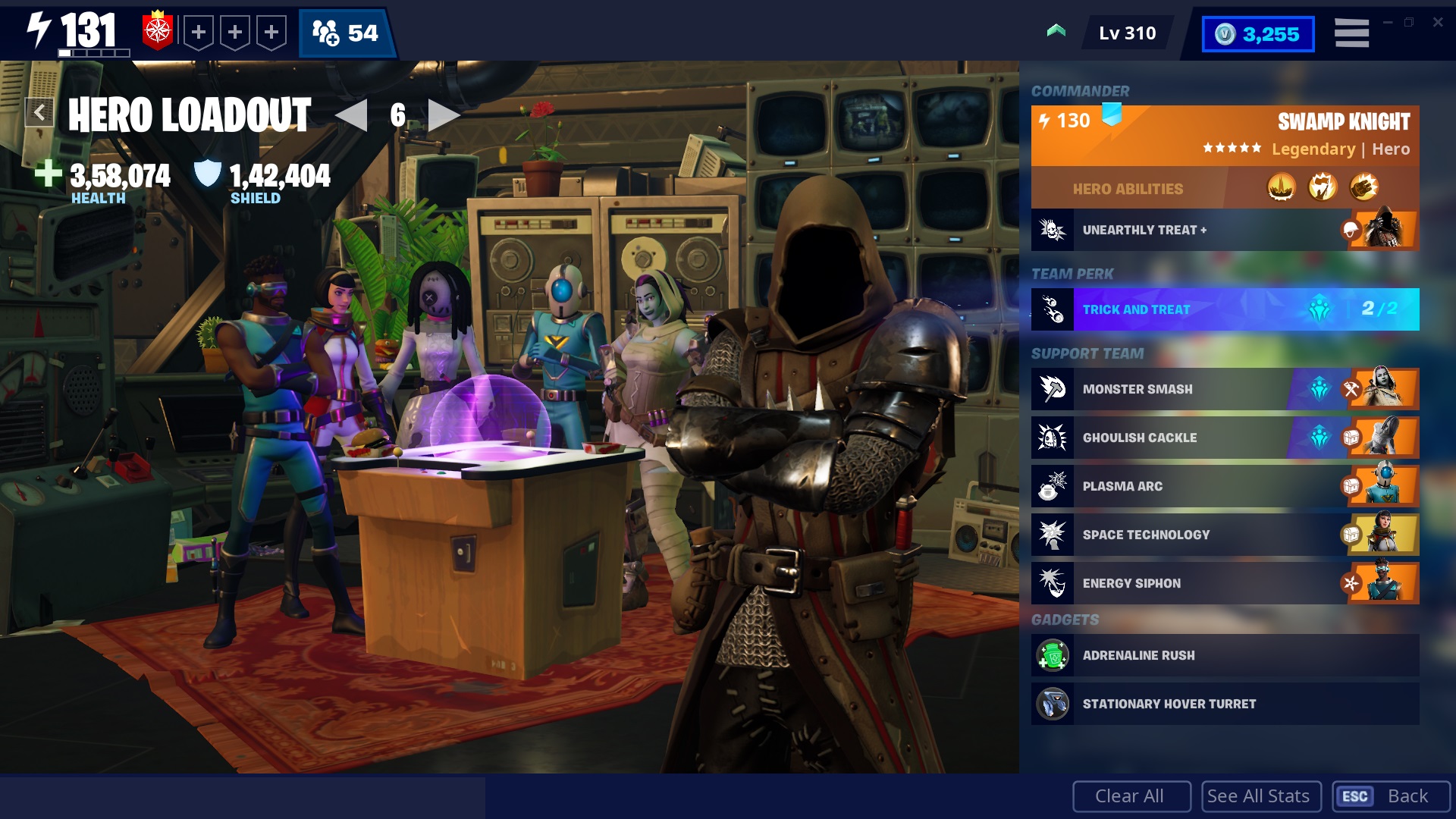 To complete the cycle, you need five more heroes that will boost your damage output and healing rate. Phantasms dealing Energy damage makes some of Save the World‘s newest heroes a perfect fit for this build. The heroes Willow, Azalea Clark, Cyberclops, Arleen Izza, and Intergalactic Ken will give you the following setup:

Get all six heroes to Level 130, and you’re all set. It gets even better if you have three other players using this build; that will allow you to bully a Miniboss by trapping him between the four of you.

The funny thing is, when writing this article after using the loadout a hundred times, I didn’t even remember if Swamp Knight was a Soldier, Constructor, Ninja, or Outlander. It. Doesn’t. Matter. The only thinking you have to do when using this hero is what emote would look the most insulting on the AI enemies as they perish at your feet. I go with Take the L. (Okay, who are we kidding, I only use the emote as I’ve-been-playing-since-Season-3 clout at this point.)