People have been asking why I’ve been smiling more lately. They say I look happier in general. Some say they see a new light in my eyes. I’ve heard some extensive theories have been going around, and today I want to put an end to these rumors and clear the air. NO, my dog still hasn’t stopped trying to mate with my sofa. Actually, Fortnite added the  Happy Holidays perk to the game this month, finally creating a reliable way to reduce ability cooldowns on demand.

Happy Holidays is available through a quest called “Misfit Toys”, which also gives you the Outlander Jilly Teacup as a reward.

A minor stat change is enough to take a hero from barely-viable to S-tier, or even outright broken, and this perk has single-handedly changed the meta. The best part? None of the older S-tier heroes were affected, meaning nobody’s favorite loadout was made irrelevant.

Abilities that benefit the most

The Fortnite Happy Holidays perk actually stacks on top of any cooldown reductions you get from other Support Heroes. The lowest cooldowns possible with this perk range from 0 to 5 seconds between abilities.

The biggest winners of this change are hands-down Going Commando, Kunai Storm, War Cry and Teddy. All of these, except War Cry, have a maximum cooldown of 5 seconds with optimized loadouts. Moreover, Support enhancements such as Hiro for Kunai Storm, and Double Agent Evelyn for Lefty & Righty, make it easier to further improve cooldowns.

Shock Tower and Seismic Smash have also gained ~5 second cooldowns, but neither of them are really strong abilities to begin with. Grenades have a 5+ second cooldown and would still be pretty great if Keep Out weren’t locked to a Team Perk slot too.

Lefty & Righty, while not having a quick cooldown, is still pretty convenient and fun now. The Mythic Pistol kills also reward some easy cooldown reductions on getting kills. The Fortnite meta is so good right now, with the addition of the Happy Holidays perk. Did anyone even use these heroes in Twine before this update? 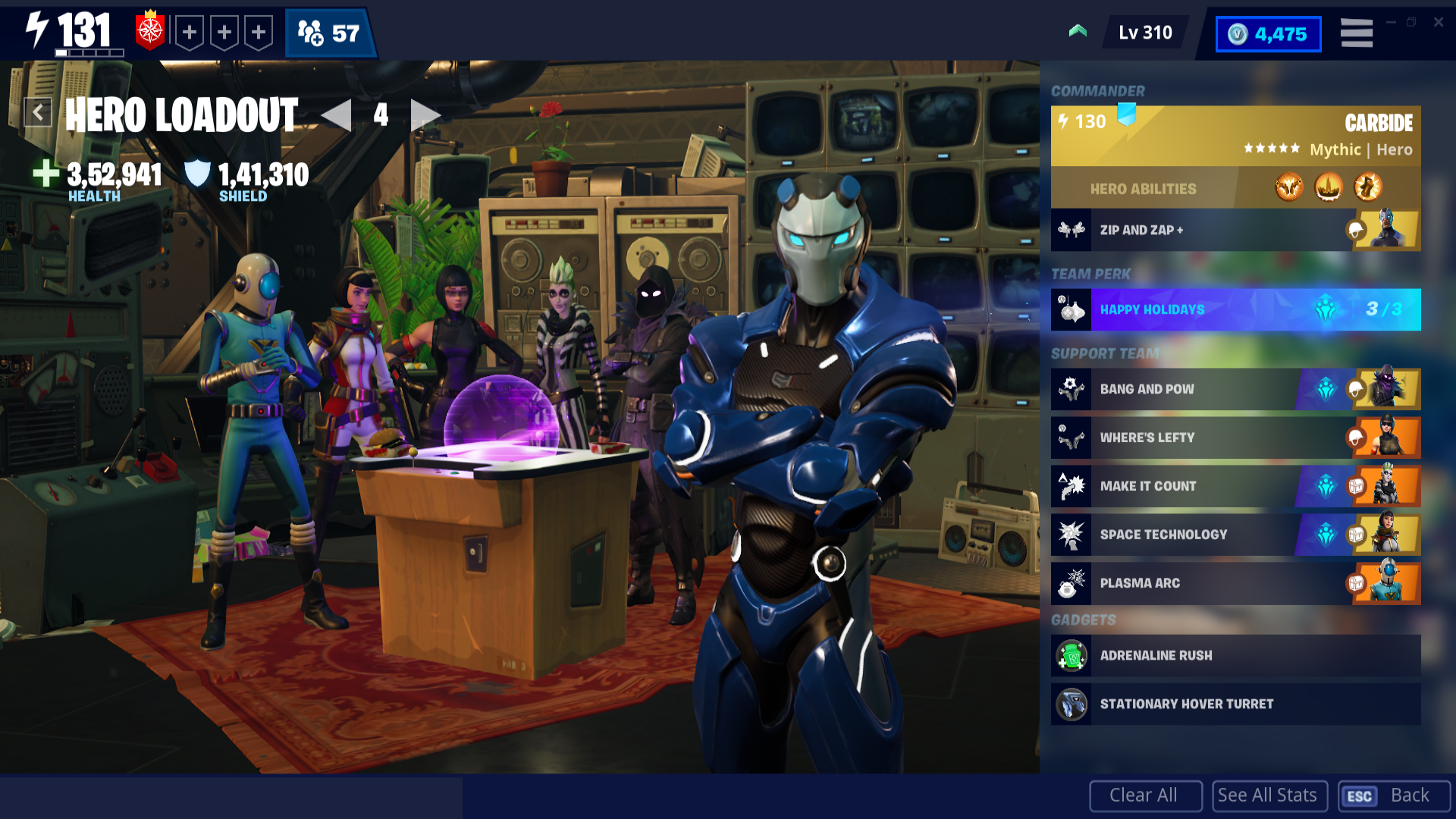 I’ve been using Carbide over Raven as my Commander, although both of those are a lot of fun to use.

Commando Spitfire is ridiculously powerful right now. Not only is the cooldown a mere 5 seconds, the DPS easily matches the raw power of Mythic weapons without requiring any ammo at all. This loadout shines in Frostnite as well, as long as you’re well guarded from Husklings. The ability does slow your movement down quite a bit. 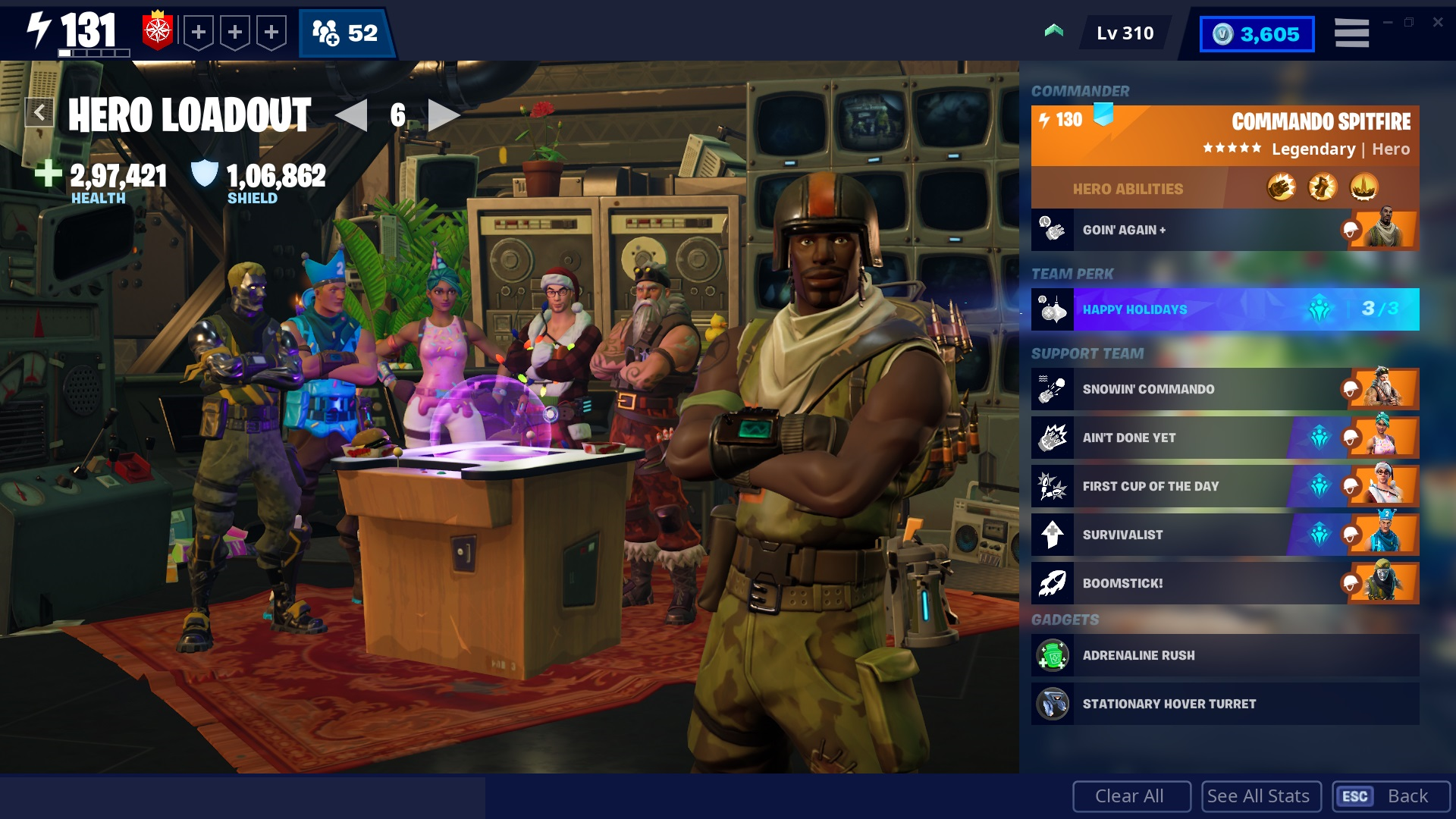 Snowin’ Commando adds explosives to the ability, and Boomstick adds base damage. It’s pretty easy to take down multiple Mist Monsters even in PL 140 missions with these!

The perk is perfect in its current state

I had honestly given up on hoping for something like this in Fortnite, and I’m so glad to have been proven wrong. I’m seeing a crazy range of heroes in lobbies. More people are using different abilities because they’re useful now, and not just because they were an available choice.

Happy Holidays feels like it is in a great spot now, and I seriously hope that Epic Games doesn’t change it. The community hasn’t been happy with plenty of nerfs lately, most of which have felt like a slap in the face. The perk is in a perfect place right now, and has made the game extremely fun for everyone.